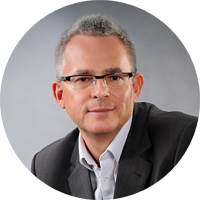 Over 15 years of experience in the financial departments of Ford Motor Company, in Poland as the Finance Director, and in European company headquarters in Germany and England. In Poland, he was responsible, among others, for the sale of Ford cars and for the pricing policy in 1999 and 2000. In Germany, he supervised finance and marketing as part of the Norwegian electric car implementation project, TH! NKcity.

In England, in 1995-1996 he participated in the work of the design team of the Ford Focus, which became the car of the year in Europe (1999) and in the United States (2000). Then, from 2003, he dealt with strategic projects concerning the purchase of production plants and acquiring external partners for joint investments.

After returning to Poland, he became the Director of Operational Risk Management at ING Towarzystwo Ubezpieczeń na Życie S.A. (currently Nationale Nederlanden TUNŻ S.A.). For nearly 6 years, he has been responsible for the Society’s investments on the capital markets and supervises a team of specialists in 7 countries of eastern and central Europe.