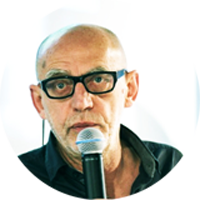 Head of maradDesign, industrial designer, lecturer at the Academy of Fine Arts in Gdańsk, where he runs the laboratory and the Department of Product Design. He studied at the PWSSP at the Faculty of Plastic Design. He has nearly 300 projects implemented for production on his account, ranging from rail vehicles to lighting and electronic equipment. In addition to designing, his passion is didactics. Shortly after passing the secondary school-leaving exams at the Pedagogical High School, he won a competition for the position of assistant at the Academy of Fine Arts in Gdańsk. He was also the vice-rector for student affairs, dean of the Architecture and Design Department, vice-rector for education and development and promoter of over 40 diploma theses and two doctorates. He habilitates by the work on control panels for railroad vehicles designed by his team.

For special skills related to teamwork, he received the Designer of the Year award granted by IWP.