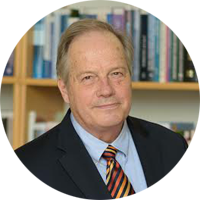 Robert Patterson is a graduate of Queen’s University in Kingston, Ontario and the University of Toronto. From Queen’s, he holds an undergraduate degree (B.Comm) in business and a graduate degree (MA) in economics. He obtained his CA designation with the Ontario Institute of Chartered Accountants while articling with Price Waterhouse in Toronto. For 14 years he worked in commercial and corporate banking, first with the Toronto-Dominion Bank (global rank of #11 for soundness by Global Finance, 2015 Survey) and later with the National Bank of Canada. In 1979 he was made a Fellow of the Institute of Canadian Bankers. In 2016, he became a Certified Expert in SME Finance from the Frankfurt School of Finance and Management. Since 1993, Robert has been an emerging market consultant and trainer specializing in SME finance. From 1994 to 1997 he was with Coopers & Lybrand’s management consulting practice. In 1998 he worked in Sarajevo on a post-war reconstruction finance project. From 1999 to 2003 he was a project manager on the EBRD’s SME Finance Facility. From 2004 to 2006, Robert was the Chairman of the Financial Services Committee of the American Chamber of Commerce in Poland. To date, his portfolio of consulting and teaching assignments includes work in over 25 emerging market countries in Eastern Europe, former CIS, Asia and Africa. At WUTBS, Robert has taught business economics, accounting, banking and finance topics since 1996. As part of the “Business Circle” program of bringing business practitioners into the classroom, he strives to deliver a high impact learning experience to what he calls “some of the best students on the planet”. In 2012, the Warsaw Politechnika awarded Robert the title “Honorary Lecturer”. Having adopted Poland as his homeland, Robert now lives on a farm near Nałęczów with his Polish wife, Monika and son Marcin. From there, he also teaches at Maria Curie-Sklodowska University in Lublin.

In 2005, Robert’s “Guide to Bank Credit” was published by Twigger Press and sold 5,000 copies over a 2 year print run. From 2006 to 2009, a series of three compendiums of terms in Polish and English covering accounting, finance and banking was published with corporate sponsorship from the firm of PricewaterhouseCoopers. Beginning in 2010, Robert was commissioned by Rzeczpospolita newspaper (“The Republic”, one of Poland’s largest daily publications) to write a series of three business books to be published in Polish and English. With print runs of 80,000, each six edition topic contained more than 1,000 translated entries and was distributed to the newspaper’s subscribers throughout Poland. The compendiums are now accessible to the public on the Polish Ministry of Finance’s website. In 2014, “Practitioners Guide to Financial Management” was published. In 2016, his textbook on financial management “Capital Where It Is Wanted” was published by UMCS University Press.