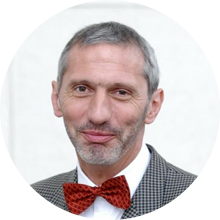 Prof. Pierre Semal is a professor at the Catholic University of Louvain who teaches and carries out scientific research in the field of management and operation management. He is a co-founder and co-director of the Centre of Supply Chain Management at the Catholic University of Louvain. He was instrumental in the founding and development of Baltic Management Institute (BMI), which had a lot of influence on strengthening the relations of its partner Vytautas Magnus University with the key European universities and its status in Lithuania.

Prof. Semal (b. 1957) completed his studies in Applied Mathematics at Catholic University of Louvain; in 1992 he successfully defended doctoral degree in applied sciences. His dissertation was awarded with IBM Belgium 1993 prize conferred by the National Fund for Scientific Research for the best Ph.D. in Computer Science in 1993. From 1979 to 1991, he worked as a researcher at the Philips Research Laboratory Brussels, Brussels, Belgium; from 1991 to 1994, he worked as a Project Leader in Philips Forschungslaboratorium Aachen (research laboratory), Germany.

The professor has significantly contributed to the development of CEMS, Global Alliance in Management Education, cooperation of leading business schools and universities with multinational companies. Since 1994, Prof. Semal has been an active member of CEMS logistics group, and since 1999, he is the representative of Louvain School of Management at the executive board of CEMS. Since 2002, he has been the Vice-President (Treasurer) of CEMS; since 2007, he has been the academic leader of the annual CEMS research Seminar on Supply Chain Management. Since 2004, he has been the organizer and the leader of Supply Chain Management Workshop organized by three universities (the University of Antwerp, Erasmus University Rotterdam and Eindhoven University of Technology).

When Baltic Management Institute was founded in 1999, Prof. Semal contributed to the development of its activity by serving as the BMI board member and the member of international academic board, also teaching in the Executive Master of Business Administration program. Professor is acknowledged as the international authority in the areas of management, logistics, supply chain management, teaching and working actively in the international science projects.

Prof. Semal has an important role in strengthening VMU international position and establishing its international status. By his initiative on 2011, there was an agreement signed for Joint Master program (double degree) between VMU and Catholic University of Louvain. By this agreement students of Economics and Management Faculty of VMU have a possibility to achieve double Master degree of Finance and Banking or International Marketing and Commerce. Initiating VMU – Catholic University of Louvain projects in scientific and international development fields and participating in realization thereof, Prof. Semal had and still has an important role in strengthening VMU international positions by ensuring internationally approved quality of operations and reliability of study programs.