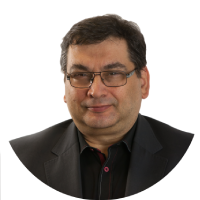 He worked in the Ministry of Health as the Director of the Department of Drug Policy and Pharmacy (2007-2015), previously as the Deputy Director of DPLiF (2007), and in the National Health Fund Headquarters as the Director of the Drug Management Department. From 2005 he was a member and from November 2007 the Chairman of the Drug Management Team, then until February 2016, he was the Chairman of the Economic Committee at the Minister of Health. He is the author, and co-author of many organizational solutions and legislation in the field of pharmacy and drugs, he was a Deputy Member of the Management Board at the European Medicines Agency; Senior Project Officer in the project “Transparency of the National Health System Drug Reimbursement Decisions” 2007-2008; he was a representative of Poland in the work of working groups at the European level.

He cooperated with WHO Poland in the organization of conferences and training courses on pharmaceuticals for Polish public administration and the Visegrad Group countries and as a lecturer at the Pharmacoeconomics Study of the Business School of the Warsaw University of Technology, the Medical University of Poznań, the Lazarski School, and the Center for Self-government and Administration Training in Lublin in the field of Management Healthcare facilities.

In the years 1999-2005 he worked at the Lublin Regional Health Fund, Lublin Provincial Branch of the National Health Fund, where he was responsible for the control, organization and monitoring of healthcare services, incl. he was the vice-chairman (2004) and chairman (2005) of the competition committee for hospitals, as well as the coordinator of works on the Provincial Healthcare Benefits Plan for 2004 and 2005.

In the years 1998-99, he was the organizer and manager of the Private Healthcare Institution, including 4 practices of a family doctor with dentists, and a team of specialist offices.

In the years 1992-1999 he was a junior assistant, then an assistant in the gynecology and obstetrics ward, he also worked in outpatient specialist care and as an ambulance doctor