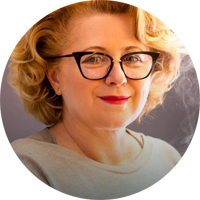 She’s a graduate in japanese from Warsaw University. She started her professional career in 1981 as a journalist at Polskie Radio. Since 1991 she has been conducting and promoting Harlequin Books publishing house which has succeeded in marketing and was described by Harvard Business School. In 1995 she has held the function of director general and a chairman of Yound & Rubicam Poland which she continued until 2000. She’s an expert in the field of branding and marketing. She’s a member of supervisory board of Rada Programowa Konkresu Kobiet and a mentor at Vital Voices.

Since 2001 she has dedicated herself to her own company New Communications, promoting Poland worldwide and through international media.

Since 2014 she’s been an owner of a perfume company Sense Dubai selling oriental perfume. She has created her own luxurious scent brand produced in Dubai.

Privately, a wife and a mother of two wonderful daughters.