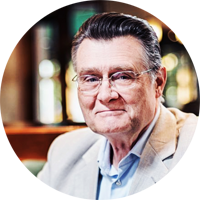 IT specialist, professor of mathematics, member of Rada Języka Polskiego, researcher, specialist in the field of mathematical IT bases, and a confectionery master.

He’s a graduate from Mathematics and Physics Departament of Warsaw University. He gained his PhD in 1966.

In 1963-1971 he worked in Instytut Matematyczny PAN having reached the position of an associate professor. Then he moved to Centrum Obliczeniowe, and after that he became a professor at Instytut Podstaw Informatyki PAN. Til the end of 90′ he was a lecturer at many international universities i.a. in Berkeley, Copenhagen.

From 1996 he dealt with quality management of enterprises (TQM) carrying out cyclical seminars on the topics in Warsaw.

In 1990-2010 (with a short break) he was the chairman of A. Blikle (a  family bakery exisiting from 1869). In 2010-2012 he performed the function of the chairman of Rada Nadzorcza and from 2013 he became the vice-chairman of the company which he shareholds the majority of.